The franklin river campaign - 25 years on

This post was inspired by a rendition Shane Howard gave of his song Let the Franklin Flow at the Blue Mountains Blues Festival a few months ago.

25 years since the Franklin River Campaign
In July 1983 the Australian High Court ruled the Franklin Dam could be stopped by the new Federal Labour Government against the wishes of the Tasmanian State government.
Prior to this over 1000 people from all over Australia and the world had travelled down to the river site camps and been arrested in a mass act of civil disobedience.
I was there with a number of friends and it was one of the defining experiences of my life.
We camped in the rainforest near Strahan for a week or two and among the many wonderful experiences I remember meeting Bob Brown who so impressed me with his integrity that I have voted for him and the Greens ever since.
In the action where I took part we walked down a logging track ("the Crotty Road") which had been ruled Hydro Electric Commission land, meaning we were trespassing. There was some media interest as the novelist James McQueen was part of our group and the TV cameras were there. This caused some consternation at my grandparents house when their nephew appeared briefly on the Channel 7 news for his 15 seconds of fame.

Bob Brown getting ready to address the Crotty Road protest in 1983. Photo from the National Gallery Collection - Bob Brown Collection 1.

The action was well planned and we were duly arrested and bundled off to Risdon jail. Expecting to be held in the remand block we were surprised to find that it was full of "greenies" so we were put into the maximum security wing with some unsavoury characters. Those few days in a cell and an enclosed exercise area confirmed for me the wisdom of staying on the "straight and narrow". Our arrest was eventually ruled illegal and we were free to go.
The Wilderness Society has some videos on YouTube that will transport anyone who was there back 25 years to another world. 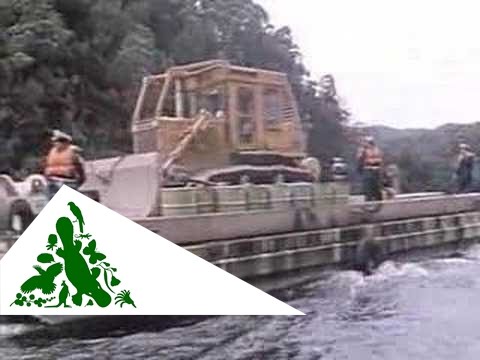